There are a lot of places on my bucketlist. Brussels wasn't! But this week I wanted to do a short trip. Lucky me there are some nice cities not far from home which can be reached within 2 hours by car. So I checked the weather forecast for some of these cities and let the weather decide where to go. Obviously, Brussels won! Already when checking on the Internet what to do there, I was wondering why I never been to the Belgium capital because this city seemed to be amazing.

Last Monday we started our trip to Brussels. At 12 p.m. we reached our first destination:

It was build in 1958 for the World Expo as a symbol for the peaceful use of the nuclear energy. The 102-meter high building can be visited for 12€ (when buying the tickets online). Who only wants to take a look, will find enough parking slots which are free for 15 minutes. But we wanted to visit another attraction right next to the Atomium:

Here it is also recommended to buy the tickets on the internet. Because our trip was very spontaneous, we had to buy the more expensive tickets at the ticket counter which makes 15,30€ instead of 12€. It may sound expensive, but in my opinion it is totally worth it. You will see the highlights of all 28 EU staats in miniature. There are not only duplicates of world famous buildings. Germany for example is not only represented with the "Brandenburger Tor" and a piece of the Berlin wall but also with cities like Bonn, Trier, Speyer, Magdeburg, Soest, Wies or Lübbeck. 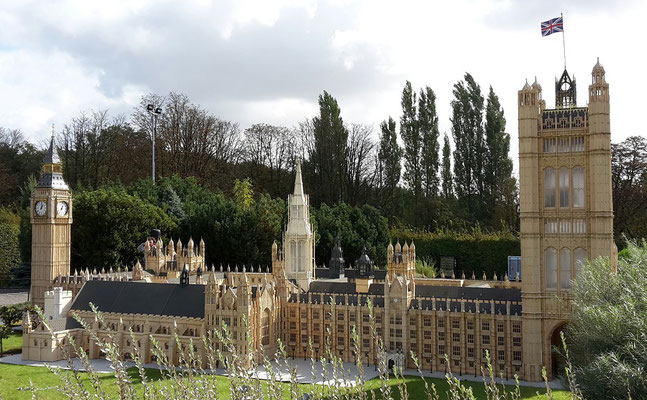 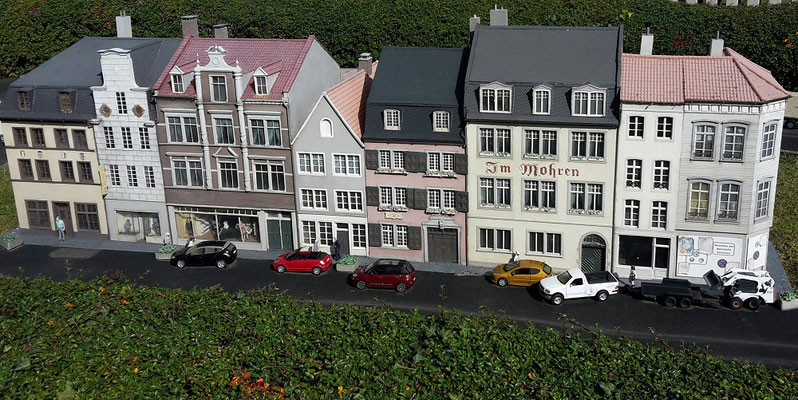 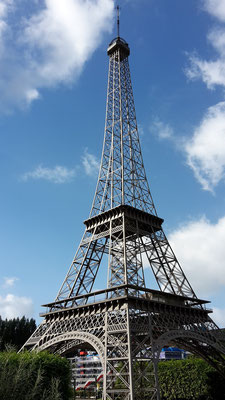 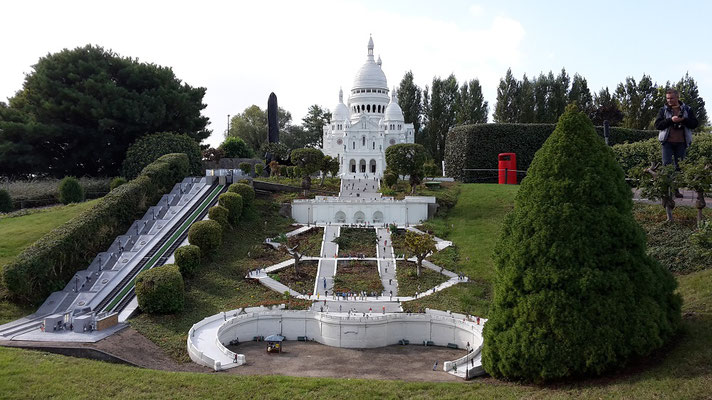 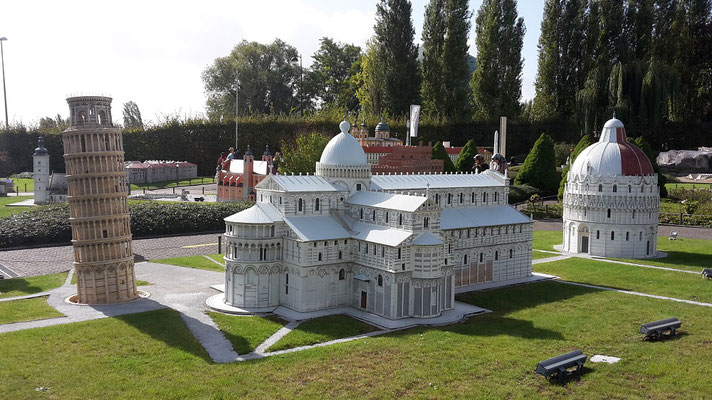 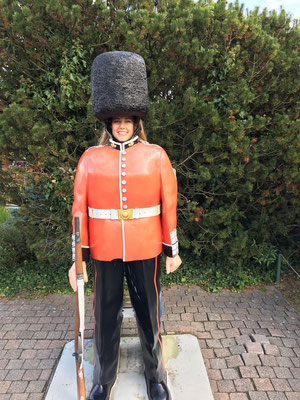 Afterwards we went by car to our hotel "Motel One". The route passed by the Parc de Laeken, where the Royal Castle, the Royal Greenhouse, the Chinese Pavillon and the Japanese Tower are located. Shortly after, we saw the church of our lady of Laeken.

At 3 p.m. we arrived at Motel One. The hotelrooms are very nice, a huge underground car park is around the corner and sightseeing places like the Cathedral St. Michel & St. Gudula, the Grand Place, the Comic Centrum or the Royal Park are within walking distance. 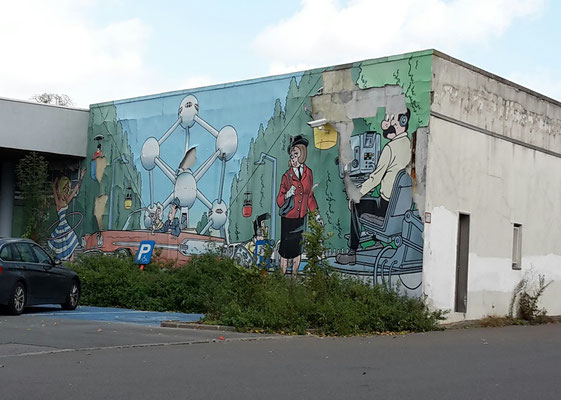 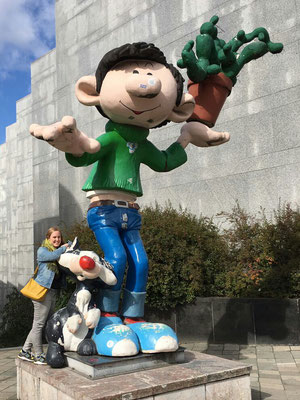 After discovering the first cartoon wall close to the Atomium (Avenue du Gros Tilleul 2), we wanted to start our tour through the city center with searching for more famous cartoon heros. Only 500 meters away from our hotel, you can find the Statue of Gaston Lagaffe. Behind it is the Belgium Comic Centre. Here you can join permanent and temporary cartoon exhibitions. Every day the museum is open from 10 a.m. to 6 p.m.  Ticket price for adults 10€. 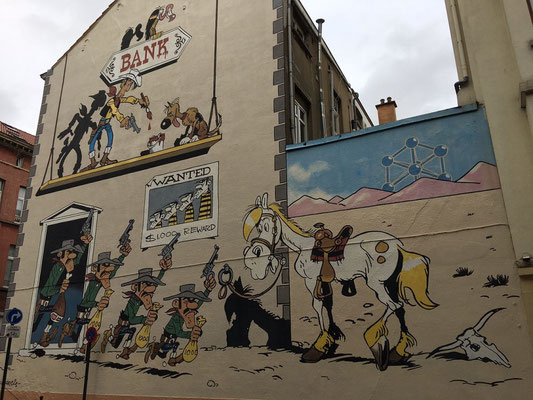 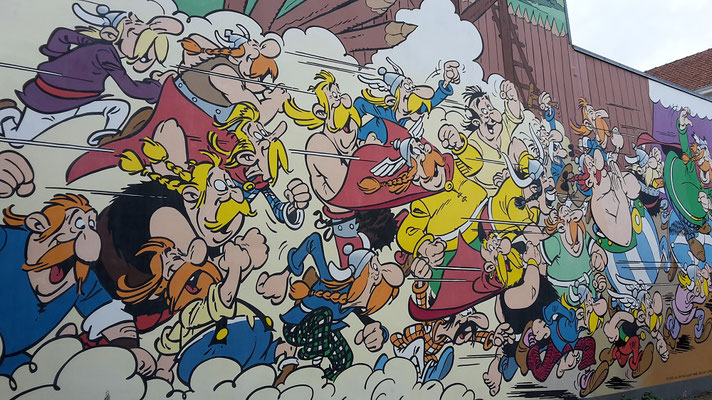 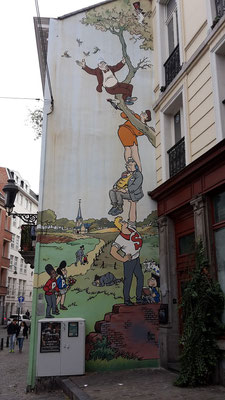 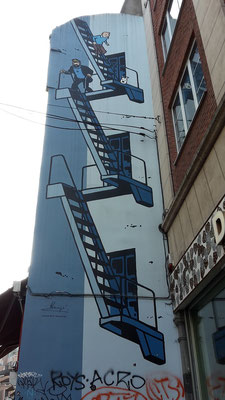 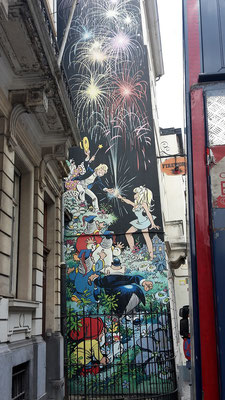 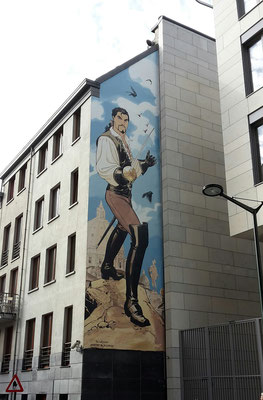 Then we walked 1,7 km to "Rue de la Buanderie" where we saw Lucky Luke with his dog Rantanplan and the 4 Daltons brothers Joe, William, Jack and Averell. Also in this street we met Asterix & Obelix and the whole Gallic village. Only 500 meters away at Place Saint Géry there is a painting of the cartoon hero Nero and again 500 meters away (Rue de l'Etuve) the cartoon Tintin was painted. Around the corner you can find a painting of Oliver & Columbine (Rue du Chêne). Then we walked back to the hotel. On our way we also saw the Skorpion (Rue Treurenberg).

After eating belgium fries and waffels for lunch, we wanted to have an italian dinner. Not far from the hotel is the italian Restaurant Al Solito Posto (Rue de l'Enseignement 73), where you can eat great pizza.

We started our second day at the Royal Park, which is only 200 meters away from the hotel.  On the north side of the park the Belgium Chamber of Deputies and the Royal Theatre can be found. From the station Arts-Loi we took the underground 1 or 5 to the station Merode (3 stops).

There is the Parc du Cinquantenaire, which measures about 37 hectares. The center piece of the park is the triumphal arch.

From the station Luxembourg we went by bus to the Royal Palais. The royal family lives in the castle in Laeken, but here official events take place.

Around the corner is Place Royale, where you can see a statue of Charles-Alexandre de Lorraine, the church Saint-Jacques-sur-Coudenberg and a lot of museums. Moreove, the view over the city is amazing.

Then we went downhill. We passed "Monts des Arts", where a beautiful garden with a nice fountain can be seen. Then we arrived at Rue du Chêne.

In the street "Rue du Chêne" we passed by a huge graffiti called "Manneken Peace", before we saw Brussels landmark Manneken Pis, a small urinating bronze statue. For special events this statue is dressed up. 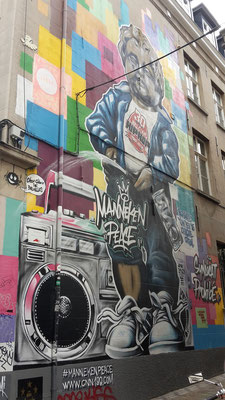 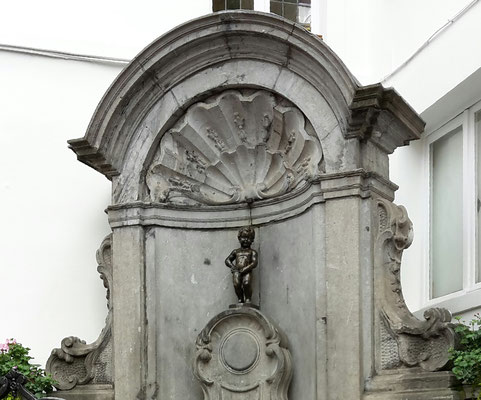 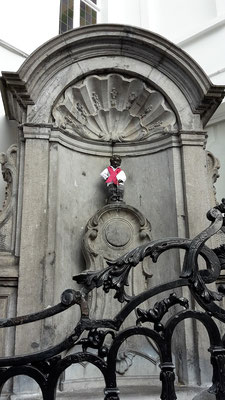 Only a few meters away is the Grand Place, also called Grote Markt, which is part of the UNESCO World Heritage site. Not very surprising because impressive buildings with magnificent facades line the square. For me the most impressive building is the town hall with its big tower, the laborious fronts and the various sculptures.

Close to the Grand Place you will find a beautiful shopping arcade in the style of the Florentine Renaissance. Under the glass ceiling there are different luxury shops like the Belgium Chocolatier Corné Port-Royal.

Only approx. 350 meters away is one of Brussels most important churches. Official events like royal weddings or state funerals take place here.

Now we are almost back again the hotel and ready to go home.

10 things you should not miss in Dublin