London is the perfect city for Harry Potter fans because not only the Harry Potter studios are located in London but also some of the most important film locations like Diagon Alley, Plattform 9 3/4, Gringotts, the visitor entrance of the Ministry of Magic and the Headquarter of the Orden of the Phoenix. Check out this self-guided tour to explore the coolest Harry Potter film locations in London in one day.

Our tour to the most famous Harry Potter film locations in London starts at Leadenhall Market (closest tube station: Monument) aka Diagon Alley. When hearing the word market, you may think of Londons amazing street markets but Leadenhall market is more a beautiful shopping passage built in the Victorian style with some nice shops, restaurants and pubs in it. Maybe you recognized this passage in the very first Harry Potter movie when Harry and Hagrid want to buy some school materials for Harry´s first year at Hogwarts. In the movie they walked through Leadenhall Market when Harry asked if they can find all this crazy stuff like a wand or a cauldron in London. Hagrid answered: „If you know where to go.“ In the next scene they are infront of the pub „The Leaky Cauldron“. The backyard of the Leaky Cauldron is a secret entrance to Diagon Alley. When touching some of the brick stones with a wand or Hagrid’s magical umbrella, the wall will open and you can enter the famous shopping street for witches and wizards. For the movie Harry Potter and the Philosopher's Stone an optician in the Bull’s Head Passage (at Leadenhall Market) were used as the entrance of the Leaky Cauldron. 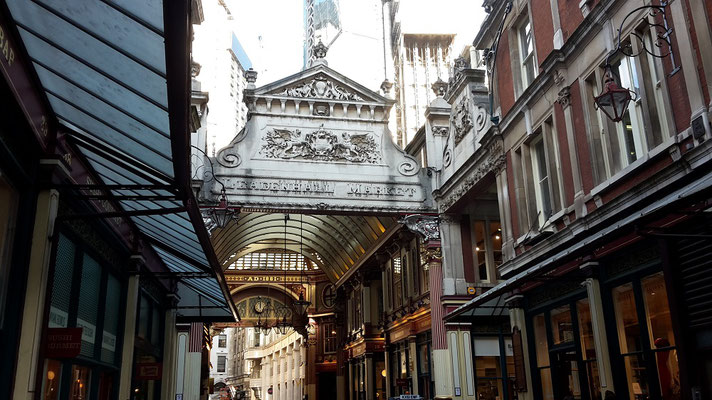 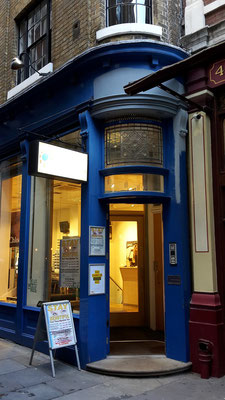 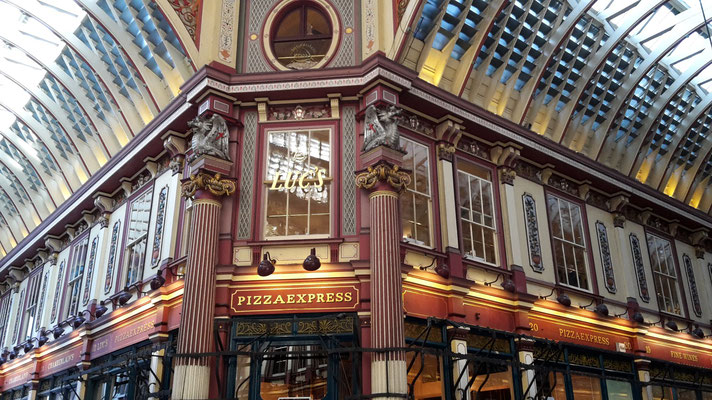 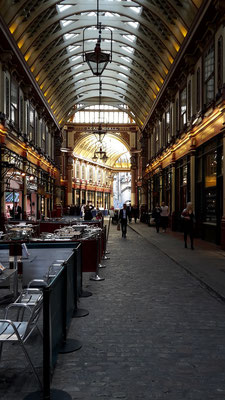 From Leadenhall Market it is approx. 1.1 km / 15 minutes to Borough Market - via London Bridge. When standing on the bridge, you can see two more Harry Potter movie locations. First the Tower Bridge which can be seen in Harry Potter and the Order of the Phoenix when Harry and some members of the order fly with their broomsticks over the Thames. Second the London City Hall which can be seen in one of the first scenes of Harry Potter and the half-blood prince. Some muggles who work at one of the upper floors of the City Hall suddenly see a heavy storm coming up following by a attack of the death-eaters. 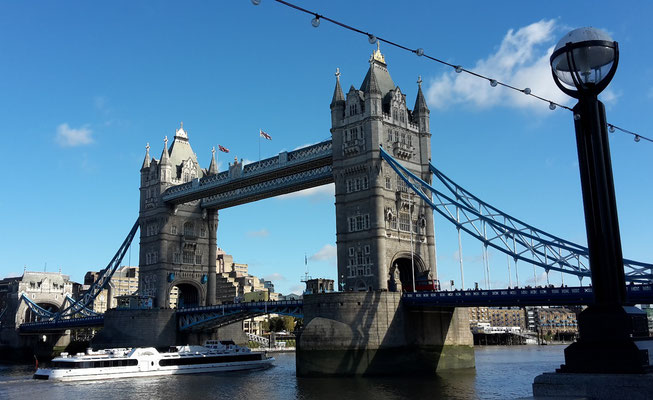 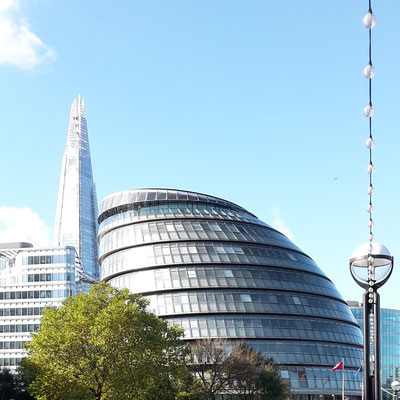 In Harry Potter and the Prisinor of Askaban the entrance of the Leaky Cauldron was relocated from Leadenhall Market to Borough Market (7 Stoney Street). In the movie Harry Potter and the prisoner of Askaban Harry arrives late at night at the Leaky Cauldron after being picked up by the knight bus, a magical triple-decker bus that provides emergency transport for stranded members of the wizarding world. Inside the pub the minister of magic is already awaiting Harry. 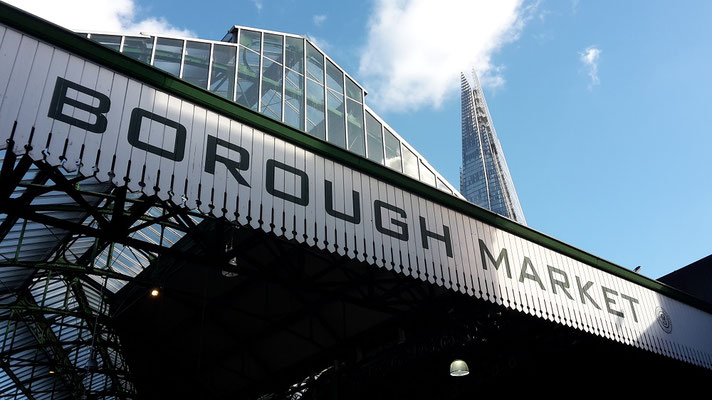 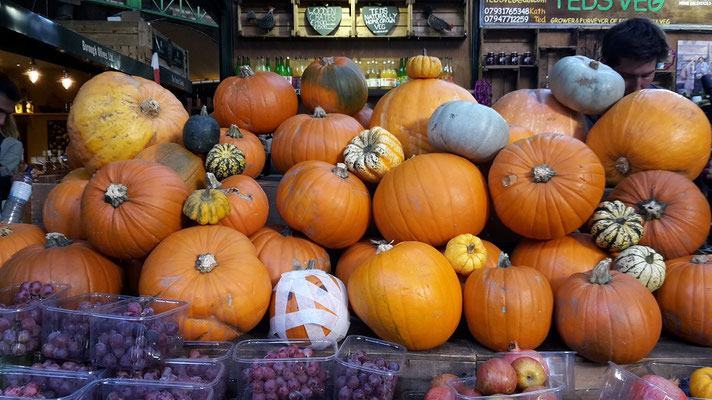 Approx. 800 meters to the west, you will find the Millennium Bridge. (It´s a 10 minutes walk along the Thames)

At the beginning of Harry Potter and the Half-Blood Prince the Millennium Bridge is destroyed by Death-Eaters. Maybe this is an allusion to the unsuccessful opening of the Millennium Bridge in the year 2000. Too many pedestrians made the bridge sway. Hence, it had to be closed again. After some time-consuming and expensive reconstruction works, the famous bridge could be finally opened. St Paul´s Cathedral can also be seen during this attack.

Tipp: From the viewing plattform of Tate Modern you have a great view at the Millennium Bridge and St. Pauls.

Inside Australia House, the Australian embassy, scenes of the Wizarding Bank Gringotts were filmed. Unfortunately it is not possible to visit the house from the inside. 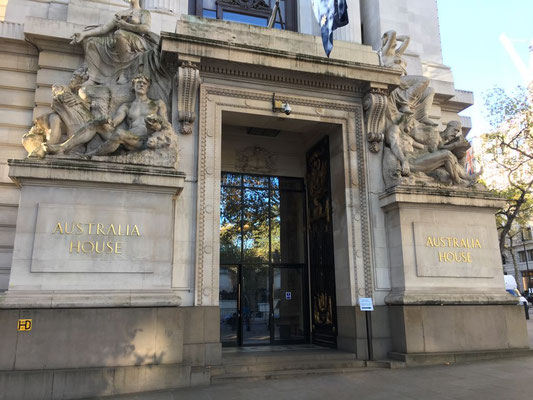 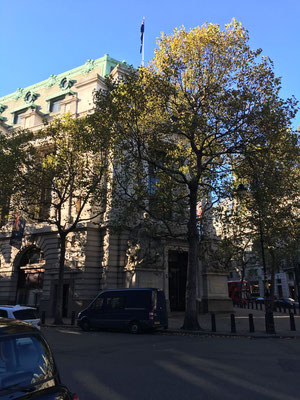 At Great Scotland Yard / Scotland Place there is the visitor entrance of the Ministry of Magic. Mr. Weasley and Harry used this entrance in Harry Potter and the Half-Blood Prince. The broken red phone box was just a movie prop and cannot be found there anymore. Otherwise we would have tried typing in the number 62442 (the numbers for the word magic) to see if the phone box turns into an elevator. 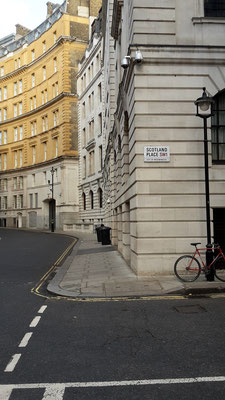 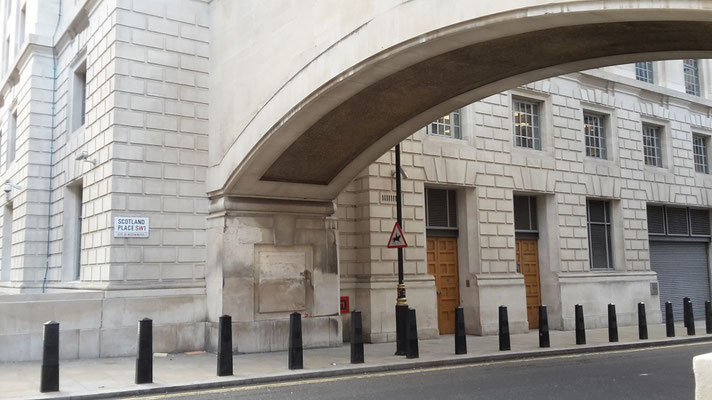 Then walk to the Palace of Westminster (800 meter via Whitehall).

Westminster Station was closed for one day for filming Harry Potter and the Orden of the Phoenix. You can see the station when Mr. Weasley and Harry took the tube to go to Harry´s hearing at the Ministry of Magic. Because Mr. Weasley travelled like a muggle for the first time, he did not know how to pass the electronical barrier. Nevertheless, they made it to Harry´s hearing in time.

When standing on Westminster Bridge you may see another Harry Potter movie location, Lambeth Bridge which is located approximately 0,5 miles to the south.

From Westminster Station take the Jubilee Line to Green Park (one stop) and then the Piccadilly Line to Piccadilly Circus (one stop). You can also take the bus from Parliament Square to Regent Street. Both takes approx. 10 minutes. (walking time is 20 minutes; 1.2 km).

One of the most famous squares in London, Piccadilly Circus, was used as a filming location for Harry Potter and the Deathly Hallows part 1 when Harry, Ron and Hermine disapparated from Bill and Fleurs wedding. They arrived at Shaftesbury Avenue which is super close to Piccadilly Circus and then walked through the Westend. When drinking a coffee in a cafes they were attacted by two death-eaters.

In Harry Potter and the Philosopher´s Stone Harry found out that he can speak to snakes at the reptile house at London Zoo. Accidentally he freed the Boa Constrictor and put his cousin Dudley into the terrarium instead.

If you want to discover the whole zoo, you should probably go there on a separate day. Then go by Tube (Piccadilly Line; 5 stops) directly from Piccadilly Circus to King´s Cross.

The most famous Harry Potter location in London is probably King’s Cross. Every year when the students go to school by Hogwarts Express they have to enter plattform 9 ¾ at Kings Cross. Today also Muggle will find the plattform in the entrance hall or at least a sign saying "Platform 9 ¾" and a luggage card which is about to disappear in the wall. (You can only go to the real plattforms with a valid train ticket.) Here you can make some souvenir photos wearing a Hogward´s scarf. Don’t go there super early in the morning or very late at night because the luggage card is removed the (see photo below).

Also in the hall: a Harry Potter fan shop. Potterheads will find everything they need there.

Additional fun fact: Did you know that for filming Platform 9 ¾ the platforms 4 and 5 were used and not the platforms 9 and 10. Some years ago there used to be a luggage card and sign as well but unfortunately it was removed (first picture below). 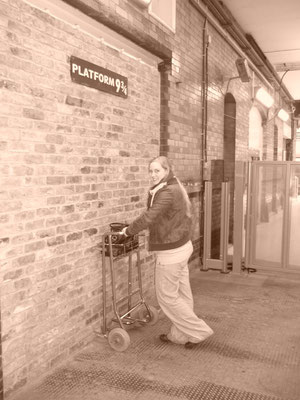 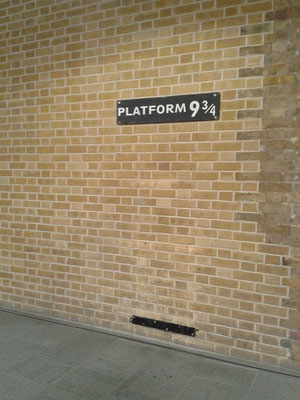 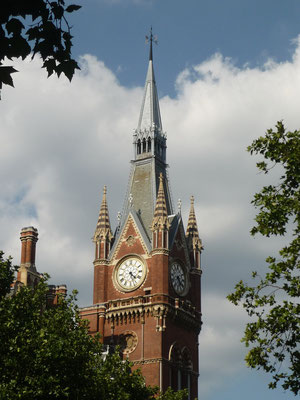 Next to the building is the railway station St. Pancras. In Harry Potter and the Chamber of Secrets you can see Harry and Ron flying from St. Pancras to Hogwarts with Mr. Weasley´s flying Ford because they missed the train. When arriving at Hogwarts the car disappeared in the forbidden forest. Later on Ron got an embarrassing howler from his mum but at least the car saved Harry´s and Ron´s life when they had to escape from Aragog and the other spiders.

Then go by bus to Penton Street, which is close to Claremont Square.

The Making of Harry Potter