One Week in Barcelona

After visiting Barcelona several times including a language course of 4 weeks, I know the city pretty well. I summarized all my experience in this blog post to give you some recommendations for the perfect week in one of the most beautiful cities of Europe. I hope you enjoy it.

Casa Milà can be reached by metro (3 or L5). From the closest station called Diagonal it is only a short walk to the last building Gaudi worked on before just working on Sagrada Familia. Due to its limestone facade the house without a right angle is also called La Pedrera (in English: the quarry). Especially the roof terrace with large, outstanding sculptures is well worth visiting. In summer concerts take place there.

Then walk along the famous street Passeig de Gracia. After approx. 500 meters you will arrive at Casa Batlló. With a little imagination you can see the back of a dragon on the roof of the colourful house and a lance sticking inside it. Supposedly it represents the legend of the holy Georg (in Catalan: St. Jordi). St. Jordi saved the life of the king´s daughter which was brought to the dragon as a sacrificial offering by killing the dragon with a lance.

Tip: Who wants to visit one of the Gaudi houses, should buy the tickets in advance on the internet.

Then keep walking along Barcelona´s magnificent boulevard Passeig de Gracia until you see the famous square Placa Catalunya. Who wants to do some shopping can go to the largest department store of the city "El Corte Inglés". On the south side of the Catalonian square you can enter Las Ramblas. Although it is very crowded here, especially in summer, you have to visit one of the most famous streets of Barcelona at least once during your vacation. You will not only find many street artists but also the famous market Mercat de la Boqueria. I can highly recommend buying a freshly-squeezed orange juice and the empanadas.

After visiting the market continue walking along the Ramblas. Pass by the Columbus Column (Mirador de Colón) and the aquarium. After approx. 25 minutes (1.8 km) you will arrive at the beach promenade Barceloneta, where you can have dinner in one of the many restaurants; for example at the Makamaka Beach Burger Cafe. (In total 4.8km)

Go by metro L7 to Avinguda del Tibidabo. Then take the tram Tramvia Blau (in winter only in operation on weekends) or the bus 196 or walk approx. 1.2 km uphill until you see the cable car station. Then take the cable car (Funicular). On top of the mountain you will have a great view over the city. The legend tells the devil wanted to lead Jesus into temptation on Tipidabo with the words: "Haec omnia tibi dabo si cadens adoraberis me", in English "All this I will give you if you kneel down“. Furthermore, there is a theme park and the church Sagrada Corazón, with a huge Jesus statue on top. 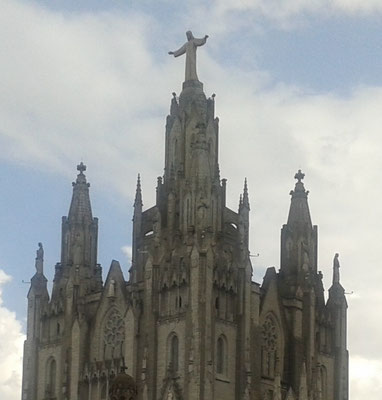 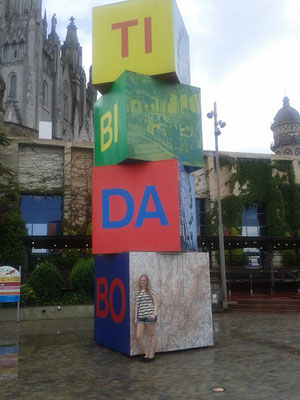 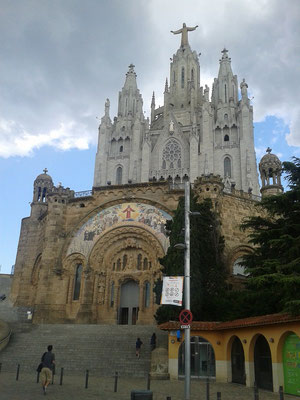 Then go back by cable car and walk to Park Güell. From the station Tramvia Blau it is approx. 2 km / a 30 minutes walk to Gaudi’s tribute to nature. At the main entrance you will see a colourful dragon who watches the stairs to the famous terrace with the huge colourful bench. This part of the parks is fee-based. The other 95% are free and also amazing. 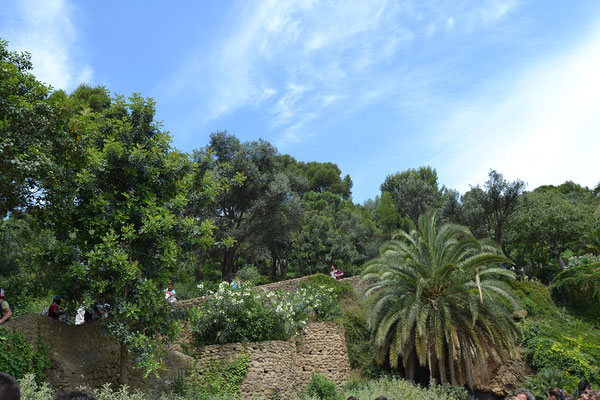 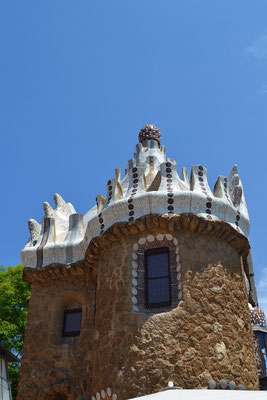 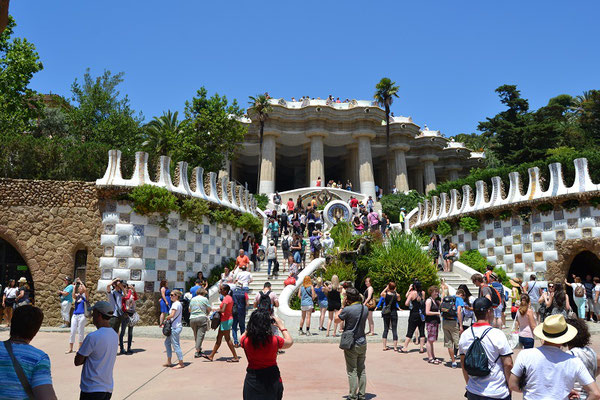 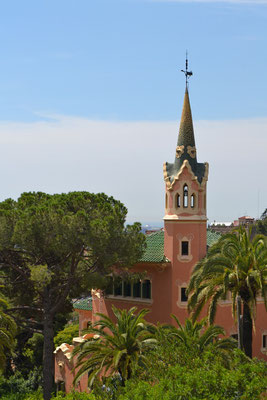 After visiting the park, walk to Gaudi´s so far uncompleted masterpiece La Sagrada Familia (approx. 2.5 km / 30 minutes). In 2026 the building should be finally ready. The tickets can be bought on the internet in advance to avoid long waiting times. If you like Sushi, go for dinner to the nearby restaurant Nakashita Eixample (Carrer de Valencia 363).  (In total 5km) 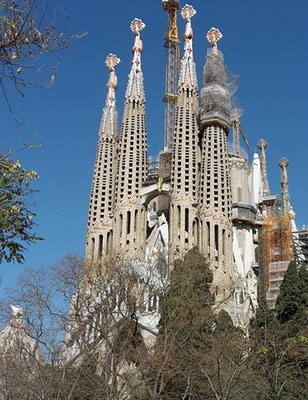 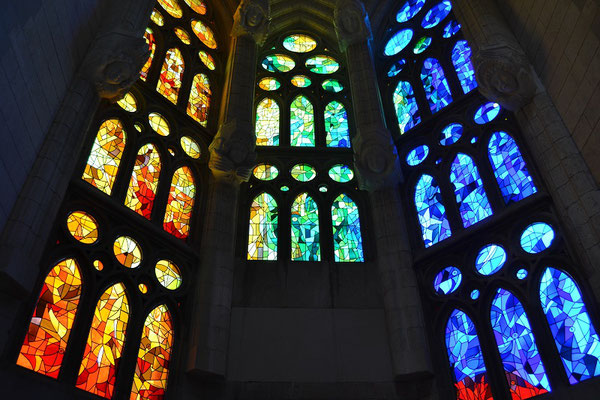 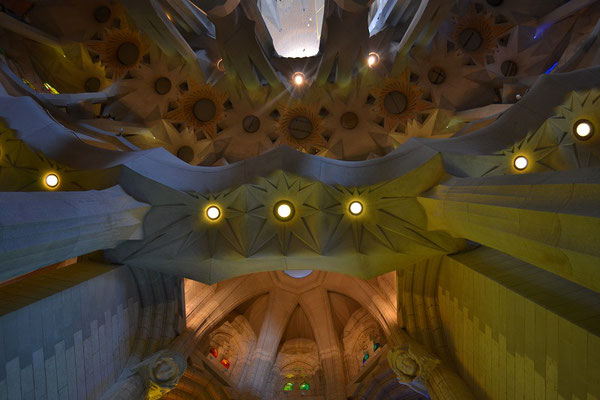 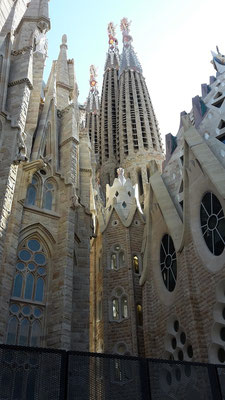 One possibility to go to Castell de Montjuïc is to take the bus 150 from Placa Espanya. Of course you can also walk or you can drive a piece up the hill by cable car. From the top of the mountain you will have a great view over the harbour and the city. 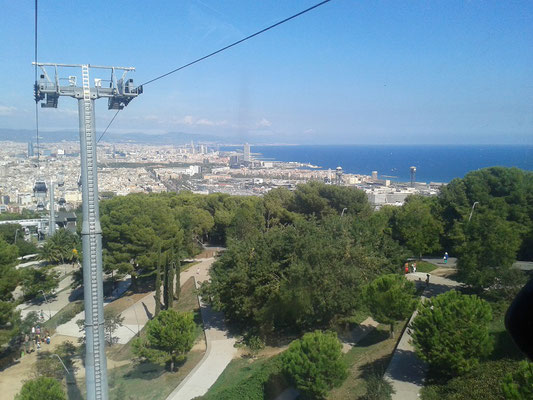 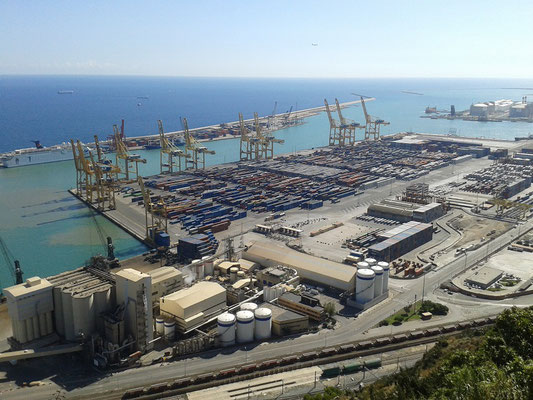 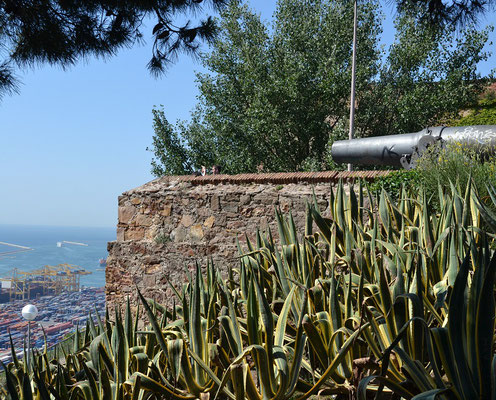 Then walk to Fundació Miró. The museum exhibits the largest collection of artworks from the artist Miró in one place and is a must-see spot for art lovers. After discovering some of the approx. 8000 pieces of works, walk to the nearby open-air theatre Teatre Grec; maybe for a small pick-nick.

Then keep walking and pass by Museu Nacional d'Art de Catalunya. Here you will have a fantastic view over the magical fountains. Now it may look a bit unspectacular but later at night when the show starts it is really going to be magical. Keep walking until Poble Espanyol. You can explore the open-air museum with 117 buildings from all regions of Spain before having dinner at one of the restaurant; for example some tapas and a glass of Sangria at Boca Loco. As soon as it gets dark, walk back to Font Mágica to see the light, water and music show. The exact time depends on the season. 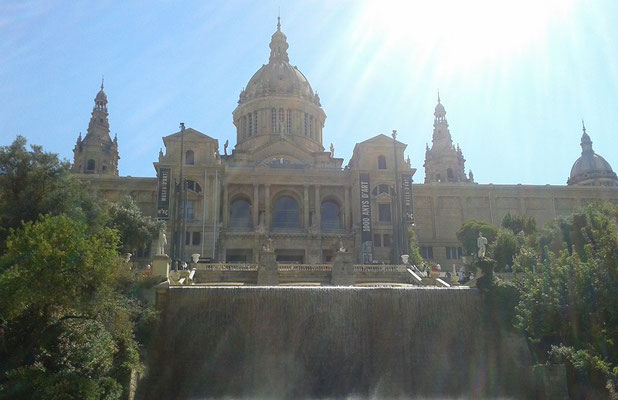 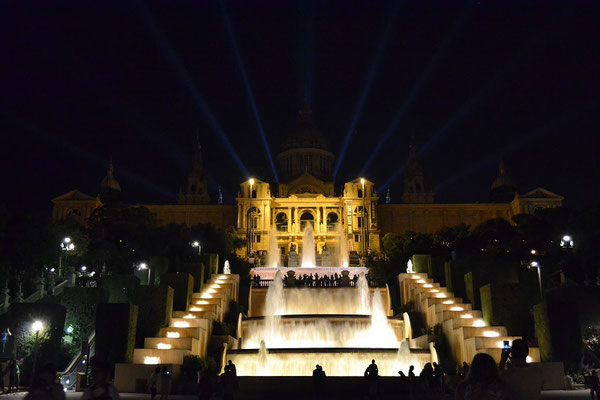 Take the metro L1 to Arc de Triomf, the entrance of the world EXPO in 1888. Only a few meters away is the entrance to Park de la Ciutadella. Inside there are several things to see like a beautiful fountain, the zoo or the Catalan parliament. After exploring the park take the exit at Passeig de Picasso. 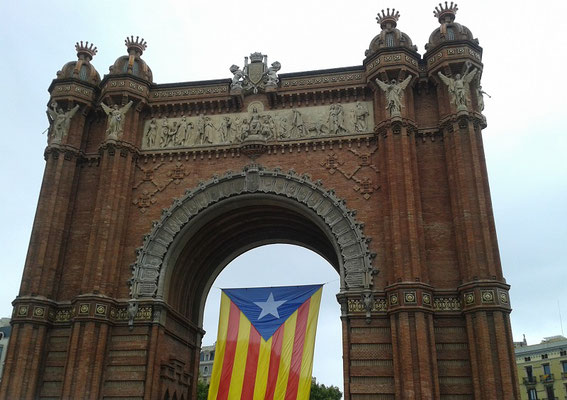 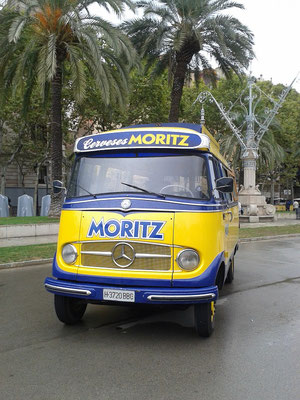 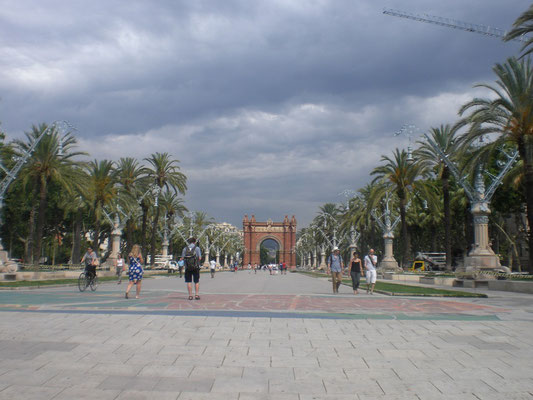 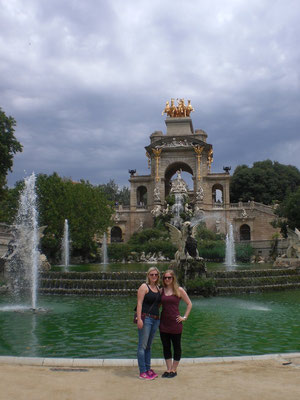 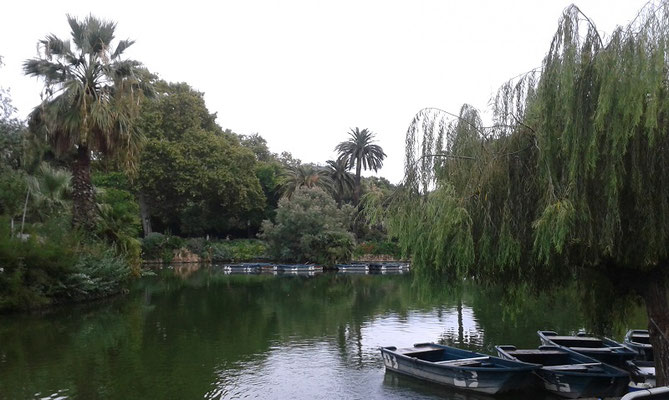 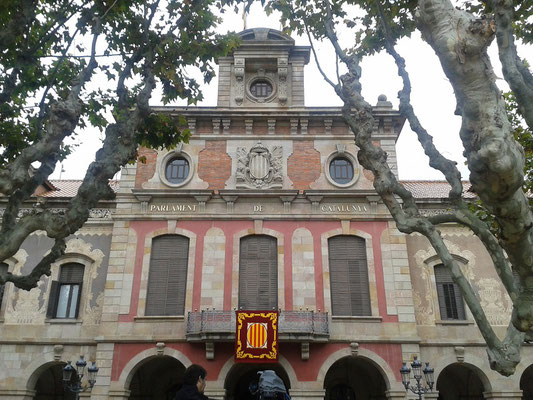 Before going to the Picasso museum go to Mercat de Santa Caterina, a beautiful Catalan market with a colourful undulating roof. Then you can go to the Picasso Museum and explore the different artworks of the famous artist (closed on Mondays and bank holidays). Afterwards walk around the beautiful streets of Barrio Born.

The gothic Cathedral of Barcelona

Next stop is the gothic Cathedral "La Catedral de la Santa Creu i Santa Eulàlia". The complete construction took several hundred years. In the 11th century the construction of the church began. Between 1298 and 1448 the church nave was finished. The tower was implemented in 1500 and the facade was finished in 1890. One highlight is the cloister with 13 white gooses. The legend tells theses gooses represent the age where the holy Eulàlia died as martyr in the 4th century. You can only visit the church for free at certain hours. But during this time it is also possible to visit the roof for approx. 3€.

Then keep walking through the beautiful streets until Placa de Jaume, where the Town Hall (Ajuntament de Barcelona) is located. Cross the square and follow the street Carrer de Ferran until passing the church Sant Jaume. After the next blog turn left and you will arrive at one of the most beautiful squares of Barcelona, Placa Reial. Especially at night it is a popular meeting point of the Catalans. You may want to have dinner here, for example some tapas at Bodega Biarritz 1881. (In total approx. 3km)

Day 5: The best beaches in Barcelona

After 4 sightseeing days, you should spend one day at the beach. The beach Barceloneta is the closest to the city centre and therefore always pretty crowded. Not so crowded is the beach Platja de la Nova Icària or Platja de Llevant.

Who wants to leave the city for one day, should go on a day trip to the small town Sitges. The train takes approx. 30 minutes from the main station Sants to Sitges. Via the small beautiful streets you can reach the beach. Along the sea promenade there are several cafés and restaurants offering great paella. 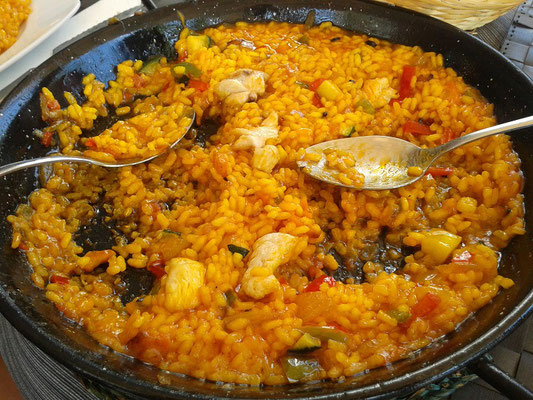 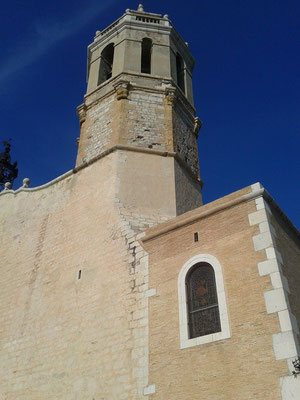 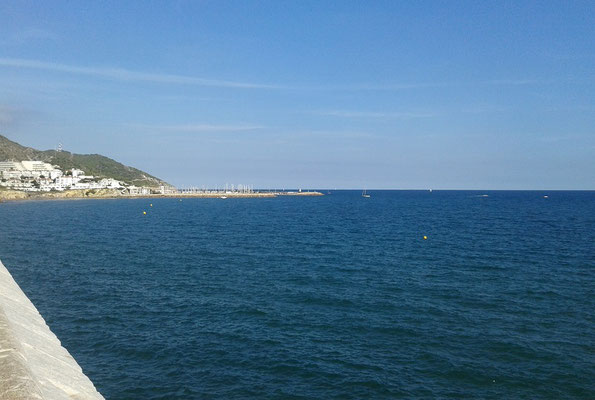 What I missed so far and therefore planned for my next trip to Barcelona is visiting the Benedictine Monastery Santa Maria de Montserrat (approx. 45 km from Barcelona). From the station Plaça Espanya it is approx. one hour by train to Aeri de Montserrat. Then the Monastery can be reached by cable car.

Unfortunately, in Barcelona there are many pickpockets. Thus always watch your stuff!!!