When travelling to another country you should know at least three words in the national language: Hello which is "Hej" in Swedish, "Hejda" means goodbye and "Tack" means thank you. Now you are ready for a great weekend in Sweden´s capital Stockholm. Here are my personal recommendations what to see and do there.

Friday night we took the last flight from Düsseldorf (Germany) to Stockholm. From the airport Arlanda you can go to the city centre by train "Arlanda Express" which takes 20 minutes or by bus which takes 40 minutes. We took the bus for approx. 22,50€ per person (incl. return journey) and arrived at midnight at the main station T-Centralen. Then we took a taxi to our Hotel Scandic Ariadne (approx. 25€ for 6 km), which we paid by credit card!

The next morning we woke up by the hoots of some boats because the hotel is located close to the harbour. There are not only cruise liners but also ferries to Estonia and Finland. The hotel itself is great for city trips because it has a great location (bus and underground connection to the city centre), great breakfast and it is pretty cheap (approx. 35€ per night and person incl. breakfast).

Saturday: We started our day in Södermalm in the so called SoFo Quarter. We took the bus 76 from our hotel to Medborgarplatsen. In this area you won´t find impressive buildings but several small shop and nice cafes. We walked uphill until we reached the restaurant Gondolen. It has a free viewing platform that offers a great view over the old town and the island Djurgarden. Afterwards, we walked downstairs to the Underground station Slussen and went by metro to Hornstull.

From this station it is only a few minutes by foot to the street market Hornstulls Marknad  - a real insider tip. This market is open from the first weekend of April until the end of September on every Saturday and Sunday from 11 a.m. to 5 p.m. It is great for shopping (antiques, children´s item, etc.) but the best thing to do here is eating. There are some amazing fast food stands offering all kind of street food like Crepe, Burger, Burritos or Indian food. Of course it is no problem to pay everything with your credit card. After trying some of this great street food, we went by bus to the island Djurgarden. 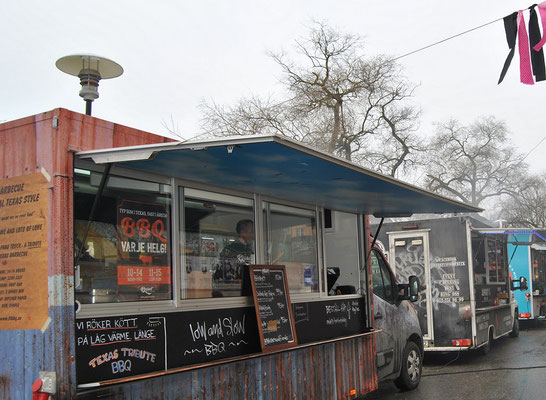 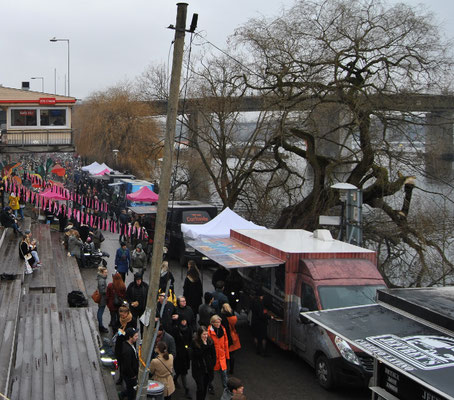 From Hornstull Market we took the bus 54 to Kungsträdgården and then the tram 7 to Vasa Museum (admission: 13.50€). The Museum is one of the most popular museums in Scandinavia. It shows the only preserved ship from the 17. Century in the world. The massive warship which is called Vasa foundered in 1628 during the maiden voyage and stayed at the bottom of the sea for 333 years. After time-consuming conservation and enhancement works it was brought to the museum.  After discovering the museum we took the bus to Stockholm castle. 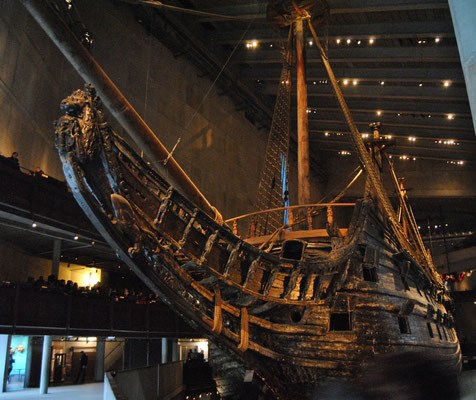 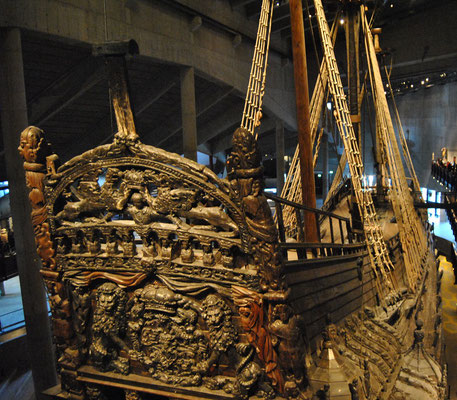 Close to Stockholm Castle (Österlånggatan 1) is the restaurant "Tradition", where we had dinner. It is famous for Swedish food and especially for Swedish meatballs (costs for one portion: 20.50€). Afterwards we went to the bar "Flying Elk" which was the last stop of the day (small beer approx. 6€, the cheapest cocktail approx. 15.50€).

Sunday: We started our day at the Olympic Stadium which was built in 1912 for the Olympic summer games. From our hotel we took the bus 76 to Lindarängsvägen and then the bus 72 to the stadium. 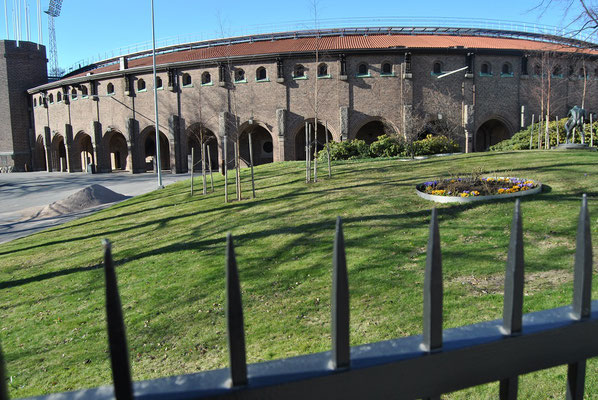 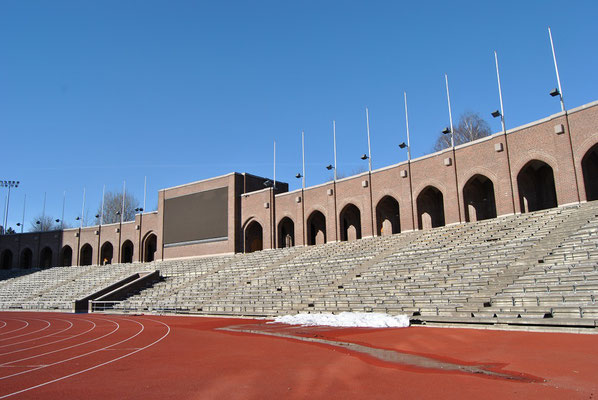 After leaving the Olympic Stadium we took the bus 72 to Odenplan, then the metro to Brommaplan and then one of the many busses going to Drottningholm Palace - home of the royal family. Close to the bus station is a small wooden pier which offers a great view at the castle and Lake Malar. 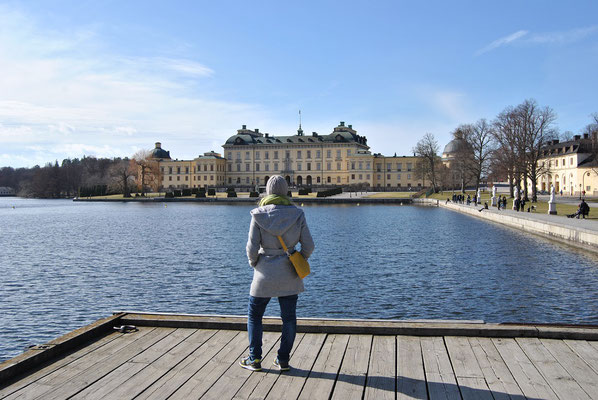 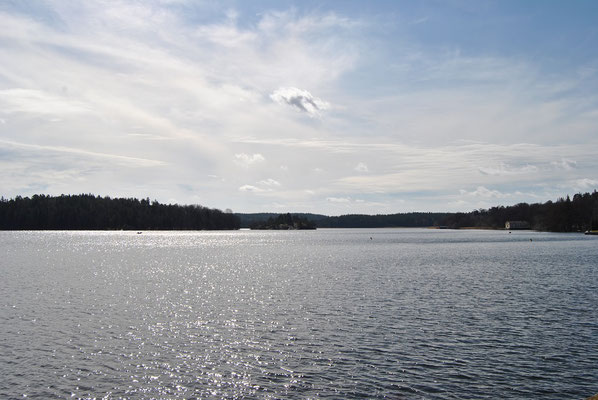 Then we passed by the royal theatre, and entered the beautiful park. In April it is almost deserted here. 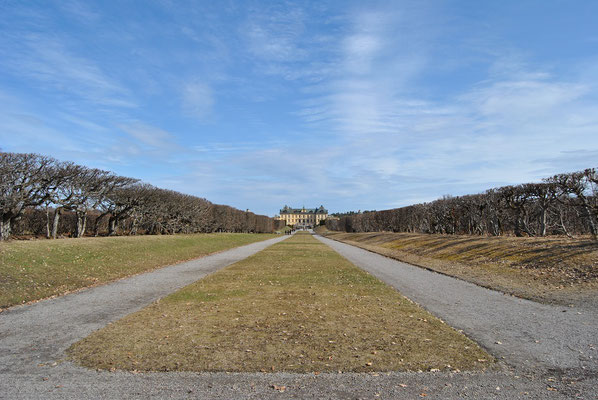 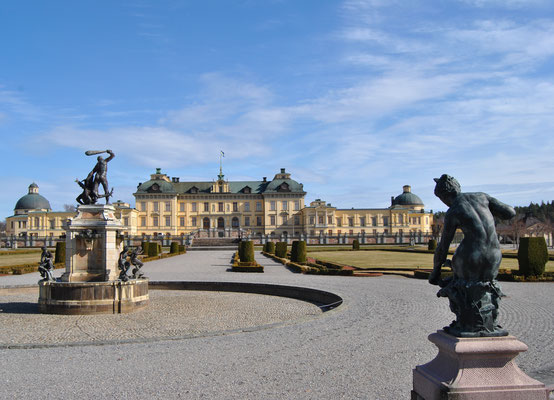 Inside the park you will find some other beautiful building like the exotic „Chinese Pavilion“. 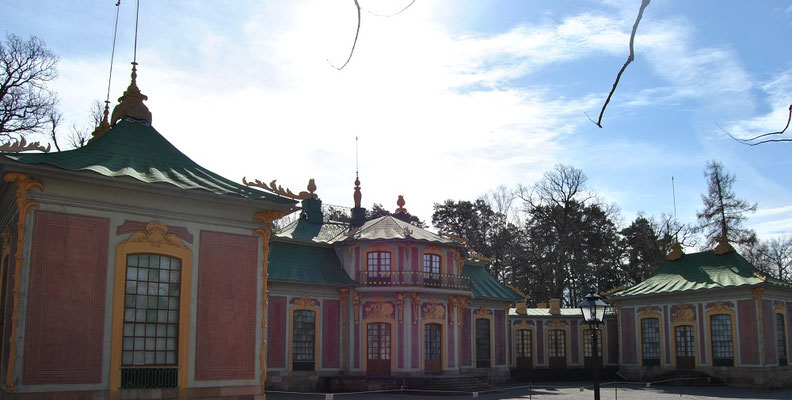 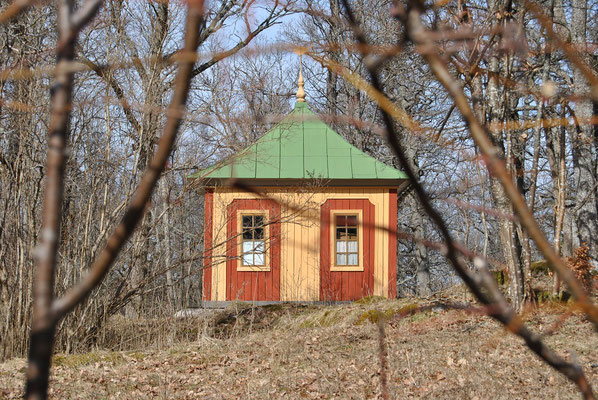 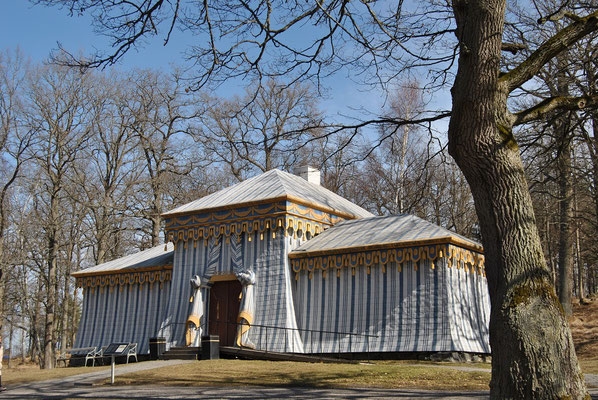 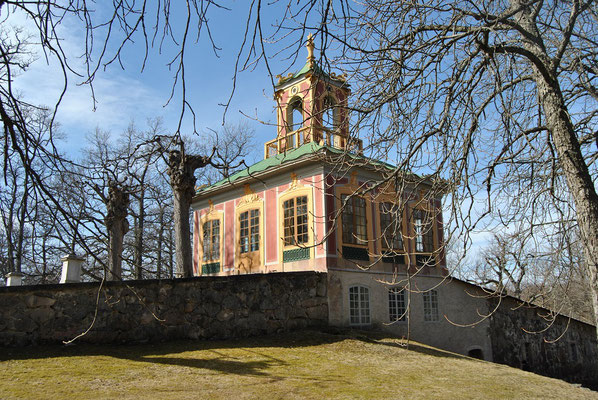 Then it was time for shopping. Therefore, we took the bus 176 / 177 to „Solna Station“, where is the largest shopping mall of the country "Mall of Scandinavia". There are 250 shops, restaurants and cafés as well as several Wi-Fi hotspots and charging stations. Afterwards we left the mall through the northern exit where we saw the so called Friends Arena. A football stadium which is often used for concerts of international artists. Then we went back to the hotel (by tram 22 to Solna center which is a beautiful underground station, then by metro 11 to the T-Centralen, then by metro 13 to Gärdet).

We started our day at Gamla Stan. The old town is one of the largest and best preserved historical city cetres in Europe. Therefore, we took the bus 76 from our hotel to "Kungsträdgarden". At the station we saw the beautiful red Jacob´s Church. Then we passed Gustav Adolf's Square, where the Royal Opera House is located. On the other side of the square is the Arvfurstens Palats, today´s foreign ministry.

Then the small bridge Riksbron led us to the island Helgeandsholmen, where we saw the Reichstag (Riksdagshuset).

Then we walked over the bridge Stallbron, turned left and arrived at one of the largest castles of Europe "Kungliga slottet". Today it is the workplace of the royal family. It used to be their home as well but they moved to the way more beautiful castle Drottningholm in 1982.

Then we passed the Church Storkyrkan, where Crown Princess Victoria of Sweden married her husband Daniel in 2010. We kept walking through the street Källargränd which led us to the famous market square Stortorget. In 1520 the legendary massacre took place here. Approx. 80 members of the high society were executed. Today the square is one of the most photographed places of the city because of the colorful gabled houses.

We kept walking through the small streets passing by a lot of souvenir shops until we saw St. Gertrude's Church "Tyska kyrkan". Services in German are still held every Sunday at 11 am. Behind the church we turned right and arrived at the smallest street of Stockholm - Mårten Trotzigs Gränd. We walked through the street which is only 90 cm wide at some points. Just a short walk further south is the sluice "Slussen", where the fresh water of the Malar Lake is separated from the salt water of the Baltic Sea. There we took the bus 76.

At the station Djurgardsbron we left the bus and walked over the small bridge to the island Djurgarden, a green oasis in the middle of the city. It used to be the royal hunting area but today it is the home of several museums, a theme park and part of the first national park "Ekoparken" within a city centre. 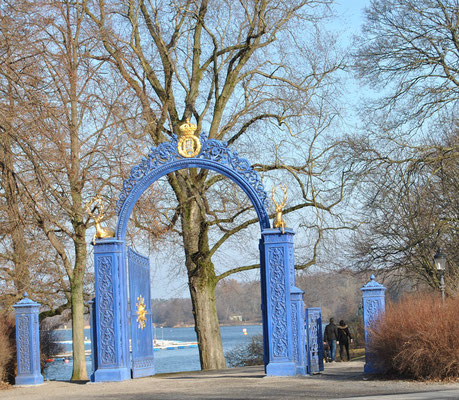 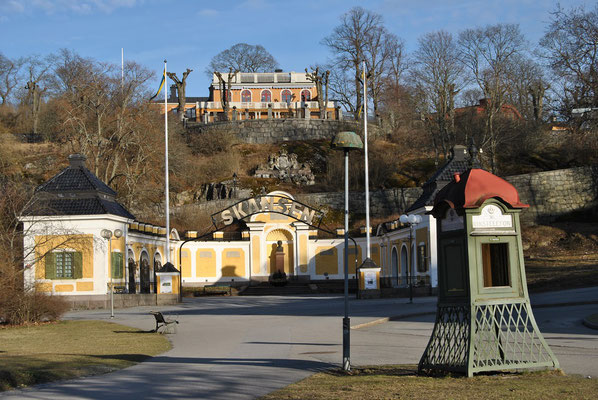 Then we passed by the first open-air museum "Skansen" in the world before arriving at the ABBA Museum (admission 22.50€). A must-see or must-experience tourist attraction for ABBA fans. The museum not only shows an extensive ABBA collection and tells the story of the band, it is also interactive. For example at the beginning of the tour you can enter the stage to win the Eurovision Song Contest, then you can go to the studio to record one of the most famous ABBA songs or you can be the 5th member of the group and perform the song "Dancing Queen" on stage together with Agnetha, Björn, Benny and Anni. At the end you can test your knowledge in a quiz.

After leaving the museum, we walked around the island and the beautiful park before we had to go back to the hotel to get our luggage and catch our evening flight back to Germany.

We bought a 72 hours Travel Card for approx. 27€ per person which is valid for all kind of public transport. It is also possible to buy the so called Stockholm Pass (approx. 105€ for 3 days) which also includes the entrance of many tourist attractions. Before buying the pass you should know what you want to visit and if it is cheaper than buying the tickets individually.

For us April was the perfect time. It can be cold but the sightseeing spots are pretty empty. 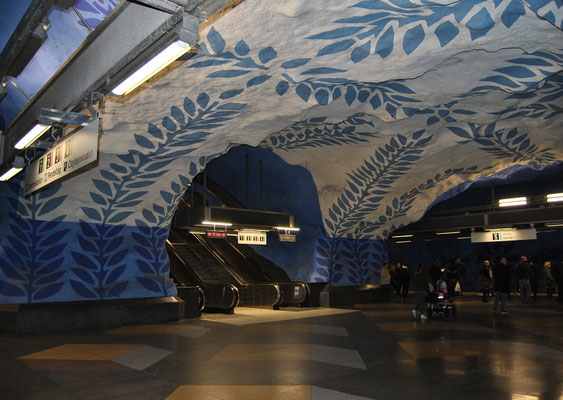 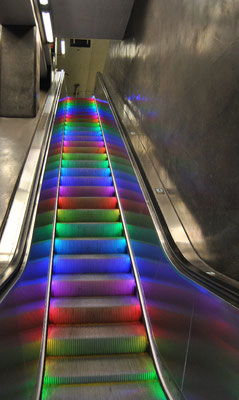 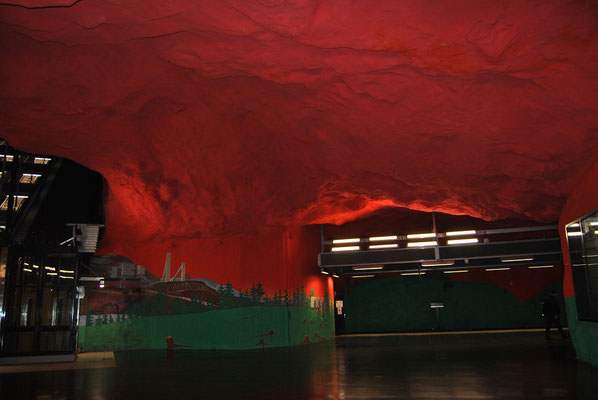 One week in Barcelona

Things to do and see in Brussels