At Parque Central there are numerous colorful Fords, Buicks or Chevys. For approx. 50€ you can go on a sightseeing tour through the city in one of these old-timers. Around the square are some luxury hotels as well as the Gran Teatro de La Habana and the Museo Nacional de Bellas Artes. On the south side there is the Capitol, an exact copy of the Capitol in Washington.

During the day the promenade is pretty empty. Only a few fishermen cast their lines. At night many tourists and Cubans meet here to have a Barbecue, dance, listen to music or relax. 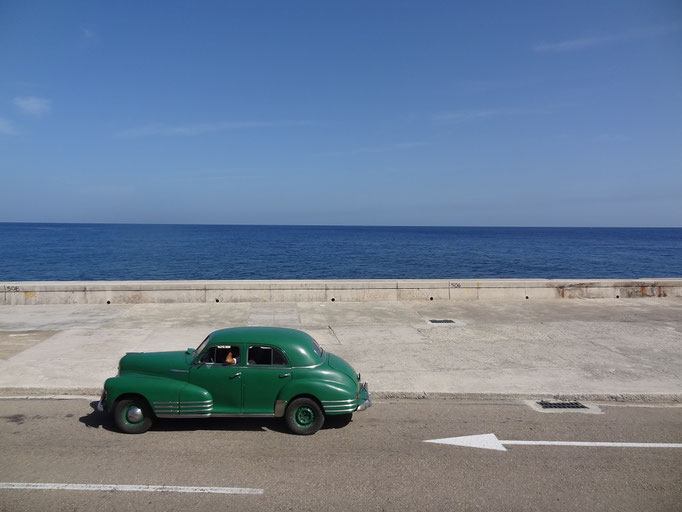 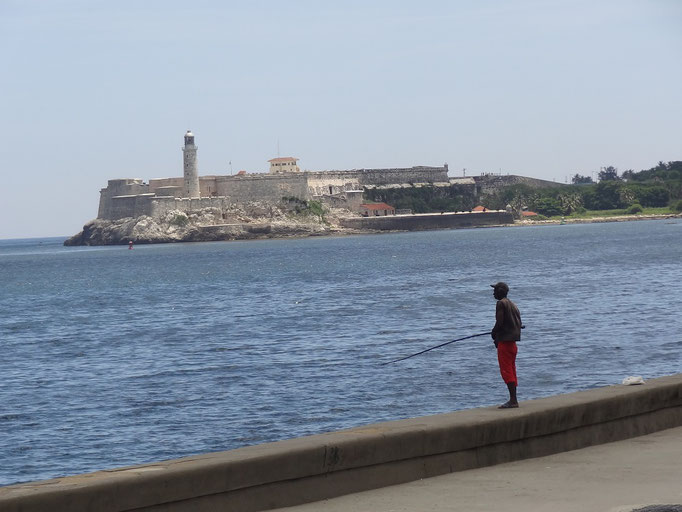 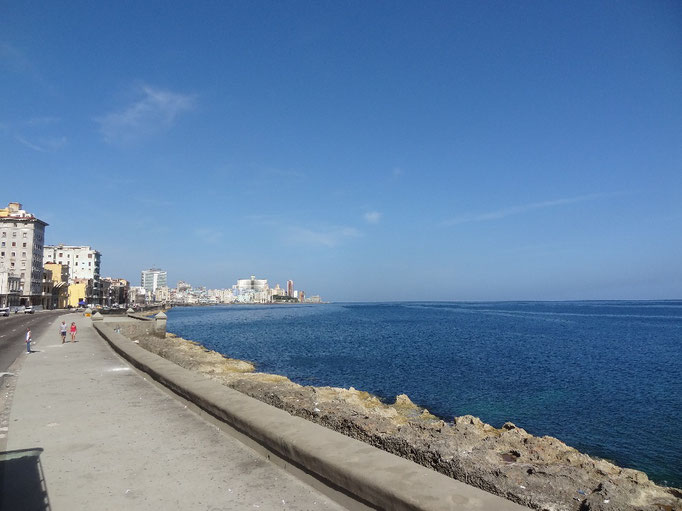 The Museo de la Revolución is a must-see when visiting the capital of Cuba. It is located in the former presidential palace. The exhibition inside the museum is the biggest and most diversified one of the country. For 8 CUC you get a unique insight in Cuba's history on 3 floors. The tour starts at the top floor. But not only the 9000 exhibition pieces are very interesting but also the building itself. On the ground floor you can still see some bullet holes from March 1957 when some students tried to storm the palace to kill Batista. My highlight was the outdoor section where you can see (among other things) the yacht granma. With it Castro, Cheguevara and Co. went from Mexico to Cuba to start the revolution. 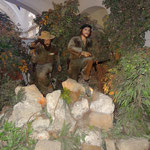 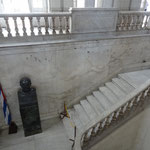 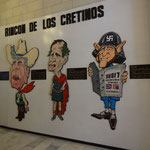 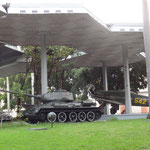 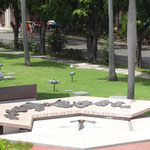 Today Plaza de la Revolución is the political center and the symbol of the revolution. In the middle of the square you can see the Memorial Jose Martí. On the opposite there is the ministry of the interior with a huge Che Guevara picture, saying "Hasta la victoria siempre" (until the lasting victory). Next to it is a picture of Camilio Cienfuegos saying "Vas bien, Fiedel".

For me the most beautiful square of the city. The historical building are a great example of the rehabilitation of the Old Town.

The beautiful square is dominated by a baroque cathedral, which was declared World Heritage by UNESCO, in 1982.

The Plaza de San Francisco is dominated by the Basilica Menor de San Francisco de Asis, one of the highest religious buildings in Latin America. On the square many Cuban women in traditional dresses wait for tourists to make some photos with them - of course against payment.

„My Daiquiri in el Floridita, my Mojito in la Bodeguita“ (Quote Ernest Hemingway)

The Floridita Bar is one of the most famous bars worldwide. It used to be one of the local pubs of Hemingway. The Daiquiris are super delicious and worth every CUC. The atmosphere is unfortunately like in a train station. The whole time tourists just come in to have a look or take a selfie with Hemingway´s statue sitting at the bar. When the salsa band starts playing it´s not possible to have a conversation. Nevertheless, you should have at least one delicious Daiquiri here. Another local bar of Hemingway was La Bodeguita, where Hemingway liked to drink his Mojito. This bar is also full of tourists drinking Mojitos and listening to loud salsa music.

The biggest cemetery of America and the 3rd biggest in the world is located close to Plaza de la Revolución (Admission 5 CUC). After the main entrance there are some locals waiting for tourists to show them around for some tip. But there are different guides for different areas and our guide was only allowed to show us 1/4 of the surface. In the heat of the day we were totally fine with seeing just some parts of the cemetery. 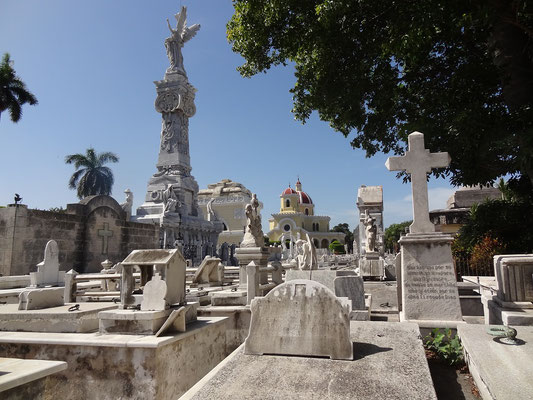 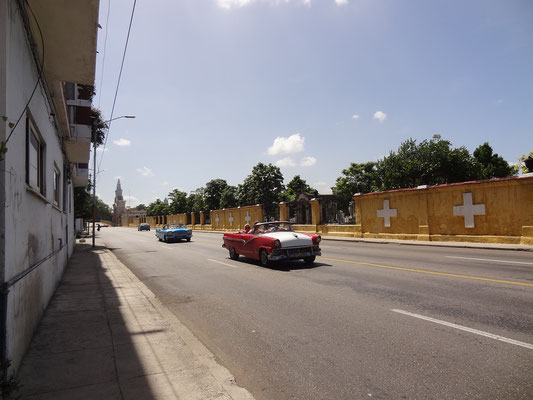 The best way to the fortress is to take a taxi. It is one of the oldest fortresses in the Caribbean. From here you have a great view over the city. Asked your taxi driver to wait for you or to pick you up later because we had some problems to find a taxi to go back to the center.

The Universidad de la Habana is the oldest of the country and one of the oldest in America. Approx. 30.000 Cubans study here; e.g. economics, natural sciences, social sciences or humanities.

In the large drug store, opened in 1886, original porcelain vessels can be found on the shelves made of precious wood. (Address: 41 Teniente Rey) 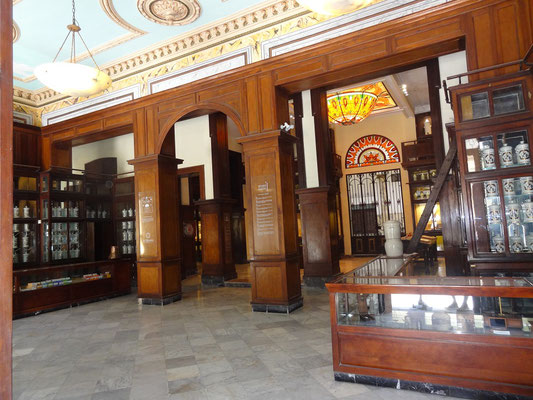 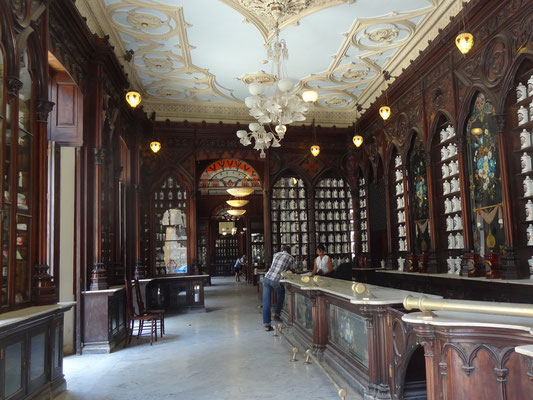 The small street is located it Centro Habana. In 1990 the artist Salvador Gonzáles started to redesign this small street with colorful grafittis and sculptures to prevent the area from further decay.Today, callejondehamel is the centre of the afrocuban culture in Havana - every Sunday a rumba festival takes place here. But also any other day, the beautifulstreet is worth visiting. Go there when you are around and explore the special atmosphere. 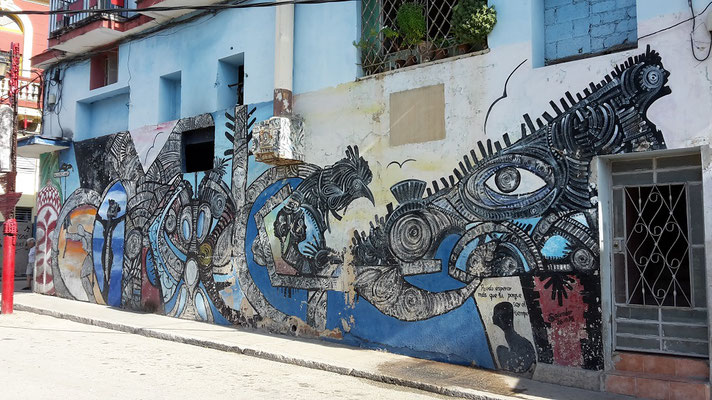 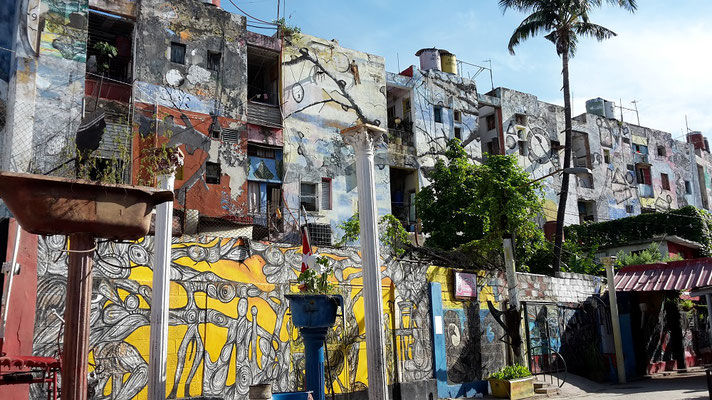 Hop on Hop off bustour Havana

Vinales Valley -  one of the greatest natural beauties of Cuba